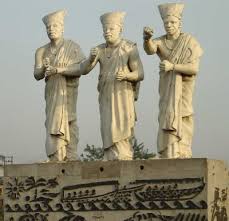 Lagos is the 2nd fastest growing city in Africa and the 7th in the world. It is the most populous city in Nigeria. The population of Lagos state is an estimated 21 million, making Lagos the largest city in Africa. Lagos was the capital of Nigeria from 1914 up to 1991 when Abuja was selected in its place.

Lagos was a war camp for members of the Benin empire and they named Lagos ”Eko”. Today, the name Eko is still used by the Yorubas in Lagos.The name Lagos  was given by the Portugese explorers. They called the place ”Lago de Curamo” meaning Lakes.

Lagos experienced rapid growth in the 60’s and 70’s as a result of Nigeria’s economic boom prior to the civil war. Lagos comprises of the Mainland and the Island .

The Mainland is densely populated as it carries  most of the population having districts such as Ebute-Metta, Surulere, Yaba, Ikeja (the state capital), Mushin, Maryland, Somolu, Oshodi, Oworonshoki,  Isolo, Ikotun ,Agege , Iju-Ishaga ,Egbeda, Ketu, Bariga, Ipaja, Ejibgo and many more. The Lagos Island districts include Victoria Island, Idumota, Ikoyi, Lekki, Ajah and Epe.

Lagos is a business oriented and fast paced community and the people who live in Lagos are called ”Lagosians”. Lagos has the slogan ”Eko oni baje o” meaning Lagos cannot be destroyed.