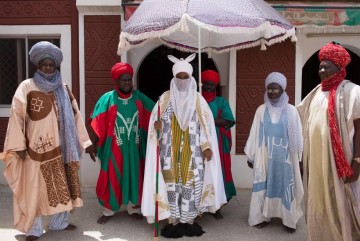 Mallam Muhammadu Sanusi II (Formerly Known as Sanusi Lamido Sanusi) was born into the Fulani Torodbe (Sullubawa) clan of Kano on the 31st of July 1961. He was crowned on the 8th of June 2014 as the Emir of Kano succeeding his late grand-uncle Dr Ado Bayero (who died on Friday 6 June 2014). Malam Sanusi was a successful banker and was a former Governor of Central bank Nigeria,  the grandson of the 11th Emir of Kano and prince in the royal family  was crowned Muhammadu Sanusi II, the 14th Emir of Kano in June 2014. Sanusi was governor of the Central Bank from 2009 to 2013, when President Goodluck Jonathan suspended him after he exposed massive corruption at the state oil firm. Critics said Sanusi had no right to use his post as a pulpit from which to preach about corruption.Today, Sanusi is the emir of Kano and his  kingdom is under the authority of the Sokoto Caliphate, a relic of an Islamic empire created by Fulani Islamic scholar and jihadist Usman Dan Fodio.