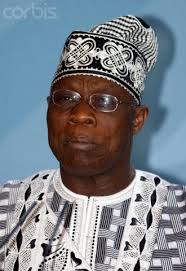 Olusegun Obasanjo was bosrn on the 5th of march 1938 , he was called to take up the mantle of leadership of the Nigerian Nation after the assassination of General Murtala Muhammed. Chief Olusegun was a career soldier who conducted a transition programme that culminated In the election of Alhaji Shehu Shagari. Obasanjo served twice as head of state in Nigeria ,First he was president of Nigeria as a military ruler from the 13th of February 1976 to 1st October 1979, He was later imprisoned by Abacha Junta  over a phantom coup .He became president again, now as a democratically elected president from 29th may 1999 to 29th may 2007

Obasanjo as a military ruler served until 1st October 1979, when he handed power to Shehu Shagari ,a democratically elected civilian president hence, becoming the first military head of state to transfer power peacefully to a civilian regime in Nigeria .

During the Dictatorship of General Sani Abacha, Obasanjo spoke out against the human right abuses of the regime and was imprisoned for his participation in an aborted Coup. While in prison Obasanjo became a born again Christian and was released after Abacha’s sudden death . in the 1999 elections he decided to run for President as a candidate of the People’s Democratic Party he won and took to office as the first Elected and Civilian Head of State in Nigeria after 16 years of Military rule, That day is Now being Commemorated as’ Democratic day’ , a public holiday in Nigeria .Obasanjo is referred to by some as a true Hero who fought for revolution in the country.