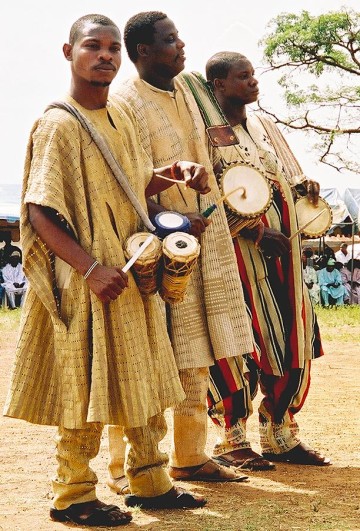 The Yoruba Ethnic group  is an ethnic group found in south western Nigeria and other parts of Africa. In 2013 the total number of Yoruba people in Nigeria was reported to be 36 million according to the CIA world factbook making them one of the largest ethnic groups in Africa. The majority of the Yoruba speak the Yoruba language

The Yorubas share borders with the Borgu in Benin; the Nupe and Ebira in central Nigeria; and the Edo, the Ẹsan, and the Afemai in mid-western Nigeria. The Igala and other related groups are found in the northeast, and the Egun, Fon, Ewe and others in the southeast Benin. The Itsekiri who live in the north-west Niger delta are related to the Yoruba but maintain a distinct cultural identity.

The Yorubas in Nigeria believe to have originated from Ile Ife. According to their Mythology, Olodumare, the Supreme God, ordered Obatala to create the earth but on his way he found palm wine, drank it and became intoxicated. Therefore the younger brother of the Obatala, Oduduwa, took the three items of creation from him, climbed down from the heavens on a chain and threw a handful of earth on the primordial ocean, then put a cockerel on it so that it would scatter the earth, thus creating the land on which Ile Ife would be built. Oduduwa planted a palm nut in a hole in the newly formed land and from there sprang a great tree with sixteen branches, a symbolic representation of the clans of the early Ife city-state. The usurpation of creation by Oduduwa gave rise to the ever lasting conflict between him and his elder brother Obatala, which is still re-enacted in the modern era by the cult groups of the two clans during the Itapa New Year festival. On account of his creation of the world Oduduwa became the ancestor of the first divine king of the Yoruba, while Obatala is believed to have created the first humans out of clay. The meaning of the word “ife” in Yoruba is “expansion”; “Ile-Ife” is therefore in reference to the myth of origin “The Land of Expansion”. Due to this fact, the city is commonly regarded as the cradle of not just the Yoruba culture, but all of humanity as well, especially by the followers of the Yoruba Faith.

Yoruba people in Nigeria are mostly farmers as the soil in all the yoruba state is favorable for farming. The predominant religion among the yorubas is christianity and Islam and a small percentage practice the traditional religion.