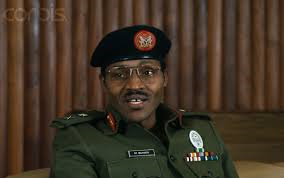 General Muhammadu Buhari was born on the 17th of December 1942. He is a retired Major General in the Nigerian Army .Buari was Nigeria’s 7th president from December 31st 1983 to August 27th he took over power from Shehu shagari. He also ran unsuccessfully for office of the president of Nigeria in 2003 ,2007 and 2011 a Native of Daura in Katsina state of Nigeria .

Buhari came into power through selection by middle and high ranking military officers after a successful Military coup that overthrew Shehu Shagari in December 31st 1983. Buhari Justified the Military’s seizure of power by castigating the civilian government as hopelessly corrupt and his administration subsequently initiated a campaign WAI war against  indiscipline .Aspect of this campaign include public humiliation of civil servant who arrived late for work. He also silenced critics of his administration ,passing decrees curbing press freedom .He also banned strikes and lockouts by workers .