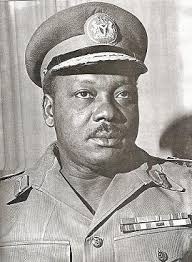 Major General Ironsi was Head of State  and commander in chief of the arm forces between January 15th 1966 to July 1966. He was born on the 3rd of march 1924 and died on the 29th of  July 19196. He was a Nigerian soldier who led the Nigerian contingent in Congo where he single handedly  negotiated the release of Australian medical personnel and Nigerian troops when they were ambushed by katagese rebels and for this act was awarded the Rita Kreuz award.

General Ironsi  came into power as Head of State on the 16th of January 1966 till 19th July 1966 .He seized power by effectively, at gun point, forcing the members of  the Balewa’s  Government to resign and he took over power from the Senate president, Nwafor Orizu who was acting president in President Azikiwe’s  absence , this was a coup that ended the First Republic.

General Ironsi’s tenure as Head of State lasted 194 days on the 29th of July 1966 ,in the early hours of the morning the Government house was surrounded by soldiers led by Theophilus Danjuma .General Ironsi was arrested and questioned about his involvement in the coup. His body was later discovered in a nearby forest