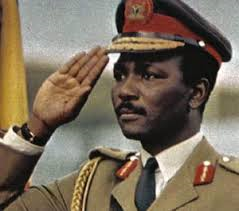 General Yakubu Gowon  was born on the 19th of October 1934 in Garan pankshin , plateau state . He became head of state after the palace coup that claimed the life of his boss, Major General Johnson Aguiyi  Ironsi  on the 29th July 1966. His tenure lasted from 1966 to 1975. General Gowon presided over the Nigerian Civil War, successfully preventing Biafran secession during the 1967 to 1970  civil war , the war came to an end on the 13th of January 1970. The General contradicted his earlier promise of handing over to civilian rule when he announced on the 1st of October that Nigeria will not be ready for civilian rule by 1976, he announced that the handing over date will be postponed indefinitely. This and many more corruption scandal provoked serious discontent within the Army .On the 29th july 1975, while Gowon was attending the OAU summit in Kampala , a group of soldiers led by colonel Joe Nanven Garber announced his overthrow .The coup plotters appointed brigadier Murtala Muhammed as the new head of state and Brigraider  Olusegun Obasanjo as his deputy. General Gowon subsequently went into exile in the United Kingdom, acquiring a Phd in Political science from the University of Warwick.