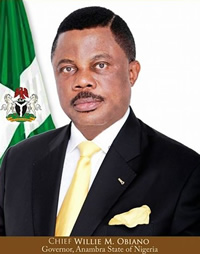 Anambra state is the 8th most populated state in Nigeria and the 2nd most densely populated in Nigeria after Lagos. The name Anambra was originally Oma Mbala , The name was a tribute to the Oma Mbala  river . The state was created on the 27th of August 1991 from the east central state. The indigenous ethnic group in the state is Igbo with a population of 4,055,048 as at census 2006. Onitscha and Nnewi  are the biggest commercial and industrial cities, respectively.