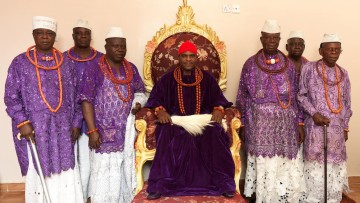 The Ovie of Umiaghwa-Abraka Kingdom in Ethiope-East Local Government Area of Delta State, His Royal Majesty, Lucky Ochuko Ararile, Awaeke 1 is a retired Air Vice Marshall (AVM). He was born in 1954 he served for 35 years as dedicated Air Force personnel.During the long service of the monarch in the Nigerian Air Force, he was part of the Peace Keeping Mission to Liberia, Sierra Leone and other parts of the world, particularly restoring peace in the Niger Delta region .His military involvement in Chad, Liberia and Sierra Leone and at home largely served as the basis for his appointment as the pioneer Coordinator of the Federal Government’s Amnesty Programme for ex-militants. His subjects say he is not only a blessing to his community Abraka but indeed to Nigeria.