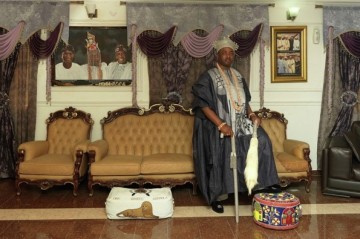 Oba Saheed Ademola Elegushi (Kusenla III), the youngest Oba in Lagos State, was born to the family of late (Oba) Yekini Adeniyi Elegushi, Elegushi Royal Family of Ikateland, Lagos State on the 10th of April, 1976. He had his Primary School Education at the St. Mathias Primary School, Lagos between 1981 and 1987. He also had his Secondary School Education at the Methodist Boys’ High School, Lagos between 1988 and 1994 and went to the prestigious Lagos State University, Ojo Campusbetween the year 1995 and 2000 and studied Bachelor of Science Degree (BSc) in Economics where he graduated with a Second Class Honourary Degree. He also had his Master’s Degree in Economics at the Lagos State University, Ojo Campus between 2002 and 2003.

The then Prince Saheed Ademola Elegushi also proceeded to the University of Manchester, Manchester Business School, United Kingdomand studied Master Degree in Public Administration between the year 2008 and 2010 before his emergence as the Oba Elegushi of Ikateland.Oba Saheed Ademola Elegushi has worked in many sectors and has many more years of experience accumulated in various capacities as a distinguished professional, politician and a philanthropist. Oba Saheed Ademola Elegushi is married to Olori Sekinat Aramide Elegushi and blessed with three (3) kids. He was the Personal Assistant to theGovernor of Lagos State, Asiwaju Bola Ahmed Tinubu between 2003 and 2007 and remained the Senior Special Assistant to Governor Babatunde Raji Fashola, SAN on Special Duties from June 2007 until his installation as the Oba Elegushi of Ikateland on the 27th of April, 2010.